"Profits and Losses" by Sergio Arguello 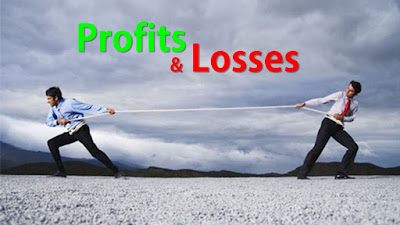 Remember the background:  Paul is imprisoned, chained to a Roman soldier in Rome.  He is writing to the brothers and sisters who are living in Philippi, a place in Macedonia known for it’s pursuit of worldly wealth and comfort.  People there were very similar to those we know now.  False teachings about Christ were common and the disciples needed to be careful to not be led astray by popular opinion, so Paul encouraged them to remain grounded in Christ.

The theme here is about rejoicing in Christ and finding our worth in Him—This would require a “Loss” of all things to “Profit” or gain Christ.  The circumstances for Paul are not encouraging from a worldly perspective, yet he is speaking about the joy we should have and that he has in Christ. 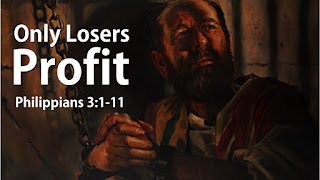 1.  Only Losers Profit
Philippians 3:1-11
Further, my brothers and sisters, rejoice in the Lord! It is no trouble for me to write the same things to you again, and it is a safeguard for you. 2 Watch out for those dogs, those evildoers, those mutilators of the flesh. 3 For it is we who are the circumcision, we who serve God by his Spirit, who boast in Christ Jesus, and who put no confidence in the flesh— 4 though I myself have reasons for such confidence.
If someone else thinks they have reasons to put confidence in the flesh, I have more: 5 circumcised on the eighth day, of the people of Israel, of the tribe of Benjamin, a Hebrew of Hebrews; in regard to the law, a Pharisee; 6 as for zeal, persecuting the church; as for righteousness based on the law, faultless.
7 But whatever were gains to me I now consider loss for the sake of Christ. 8 What is more, I consider everything a loss because of the surpassing worth of knowing Christ Jesus my Lord, for whose sake I have lost all things. I consider them garbage, that I may gain Christ 9 and be found in him, not having a righteousness of my own that comes from the law, but that which is through faith in[a] Christ—the righteousness that comes from God on the basis of faith. 10 I want to know Christ—yes, to know the power of his resurrection and participation in his sufferings, becoming like him in his death, 11 and so, somehow, attaining to the resurrection from the dead.

·       Paul had excelled in the learning and keeping of the Law.
·       He was a man that was looked up to and seen as successful in what he did and knew.
·       He had a good life and career ahead of him
·       He had established himself well in his community.  He was defined by what he did.
·       Many of you are very good at what you do, very talented in your field.
·       You are invested in your career and it defines you
·       Something defines you when it controls your schedule, your time, your thoughts and your actions.
·       When Paul was confronted with the humbling truth about Christ on the road to Damscus, he gave it all up!  He came to the realization that everything was garbage, it was a loss, in comparison to profiting or gaining Christ!
·       Brothers and sisters, nothing else is as precious as the joy which we will find in Christ!  It will cost you everything though!
·       You see, if you’re holding on to a job or a relationship or a stance based on your pride or a perceived knowledge or false doctrine, you’re holding on to garbage and you will not experience true joy in Christ until you lose all of those things.
·       You may be surprised, but there is freedom in losing everything to profit Christ.
·       When nothing owns you, when nothing controls you; when sickness, or imprisonment or persecution, or poverty or career does not control your emotions or your decisions you are truly free and can find true joy in Christ.

Paul said in vs 10-11 that he wanted to know the power of His resurrection and to participate in the sufferings of Christ on the cross.
·       I’m going to drop some knowledge on you right now!
·       If you are going to know the power of His resurrection you must be willing to participate in the sufferings of Christ on the cross, you must live a crucified life.  That is why Jesus said that you cannot be a disciple of His unless you deny yourself and carry your cross daily and follow Him.
·       This is also why in chapter 2 of Philippians Paul said that working out our salvation with fear and trembling also entailed living out the life that God called us to without grumbling or complaining.
·       It’s easy to complain, I can be a pro at it!  “I can’t believe we are singing this song again, I can’t believe Sergio is asking us to come to midweek on time, I can’t believe my leader is asking me to help that person, I can’t believe my boss is asking me to do that task—it’s not in my job description, I can’t believe I gotta love these people who are not being loving with me.  You mean to tell me I need to confess my sin and be a loving husband or submissive wife.  I can’t believe no one is calling me!  What! I need to forgive that monster of a person?  Do you know what they’ve done to me?  Woe is me, woe is me, woe is me.
·       You cannot live a resurrected life and you cannot experience the power of the resurrection unless you put this stuff and the self on the cross!  Your sinful self needs to die on the cross if you are going to have communion with The Spirit, and place in heaven.

Paul said “I want to know the fellowship of His suffering becoming like Him in His death!” “somehow attaining to the resurrection from the dead”  All his past successes were mere garbage and a loss.

It’s a great trade off!

We must mature and understand the greatness of it, like a mature person growing taste buds for complex tastes.  You cannot appreciate the life that Christ has laid out for you unless you stop being spiritually immature and embrace suffering—you will change in terms of your spiritual taste buds and understand the rich things that God wants you to embrace.
Open your eyes and taste the goodness of a life where you lose everything to profit Christ!  It’s a great trade! 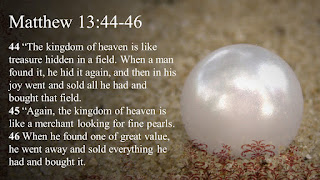 Matthew 13:44-46
44 “The kingdom of heaven is like treasure hidden in a field. When a man found it, he hid it again, and then in his joy went and sold all he had and bought that field.
45 “Again, the kingdom of heaven is like a merchant looking for fine pearls. 46 When he found one of great value, he went away and sold everything he had and bought it.

Christ calls us to a life of self-denial, yet so many will not live this way but will live as enemies of the cross of Christ (the life of suffering for God and His Kingdom) and will not suffer with Him.  Their God is their flesh and their end will be destruction because their minds will always be on earthly things.  More concerned about their life, and their work and their worldly comfort than the interests of Christ.

Not so with Paul!  He will live a life crucified and he is calling the disciples in Philippi to do the same.
In the following scripture we read regarding his experiences before Philippians was written: 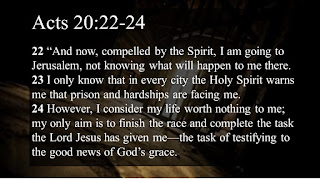 Acts 20:22-24
22 “And now, compelled by the Spirit, I am going to Jerusalem, not knowing what will happen to me there. 23 I only know that in every city the Holy Spirit warns me that prison and hardships are facing me. 24 However, I consider my life worth nothing to me; my only aim is to finish the race and complete the task the Lord Jesus has given me—the task of testifying to the good news of God’s grace.

All true disciples will live as strangers and aliens—losing it all to gain Christ, that’s what it means to have a true saving faith. 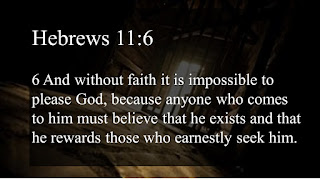 Hebrews 11:6
6 And without faith it is impossible to please God, because anyone who comes to him must believe that he exists and that he rewards those who earnestly seek him.

Hebrews 11:13-19
13 All these people were still living by faith when they died. They did not receive the things promised; they only saw them and welcomed them from a distance, admitting that they were foreigners and strangers on earth. 14 People who say such things show that they are looking for a country of their own. 15 If they had been thinking of the country they had left, they would have had opportunity to return. 16 Instead, they were longing for a better country—a heavenly one. Therefore God is not ashamed to be called their God, for he has prepared a city for them.
17 By faith Abraham, when God tested him, offered Isaac as a sacrifice. He who had embraced the promises was about to sacrifice his one and only son, 18 even though God had said to him, “It is through Isaac that your offspring will be reckoned.”[a] 19 Abraham reasoned that God could even raise the dead, and so in a manner of speaking he did receive Isaac back from death. 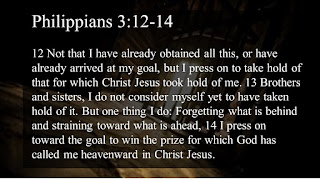 Philippians 3:12-14
12 Not that I have already obtained all this, or have already arrived at my goal, but I press on to take hold of that for which Christ Jesus took hold of me. 13 Brothers and sisters, I do not consider myself yet to have taken hold of it. But one thing I do: Forgetting what is behind and straining toward what is ahead, 14 I press on toward the goal to win the prize for which God has called me heavenward in Christ Jesus.

Posted by Inland Empire Church of Christ at 4:50 AM 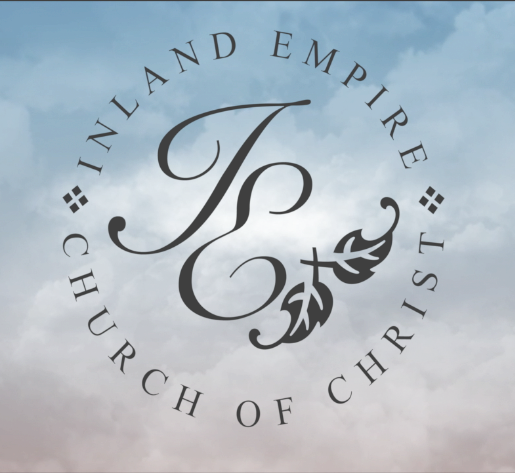